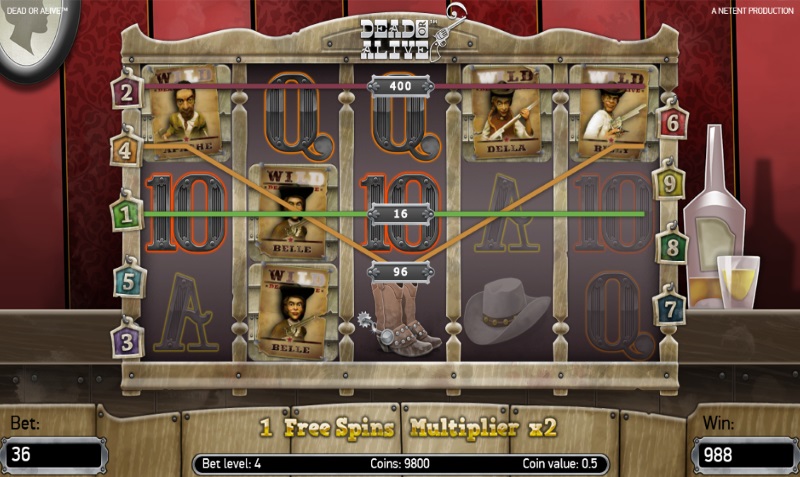 You are here: Home / Games / Dead or Alive

With its legendary gameplay, graphics and bonuses, Dead or Alive, or DoA is one of the most played and admired slots in the entire history of the industry. Playable on the brick and mortar, but also on the desktop or mobile devices, DoA is a worldwide phenomenon which can now be taken away on smartphone or tablets, a feature that players have been waiting for since 2010. This is one of those games that will have you stuck to your screen, like Starburst or Book of Ra for example, because you will simply can’t get enough of it.

You’ll love all the scatter action when it comes to Dead or Alive.

Having 9 pay lines and 5 reels, Dead or Alive is finally available on the mobile phones after NetEnt officially released it for all platforms in 2016. If you want to learn everything about the new versions of the slot, including the mobile ones, keep on reading and discover its secrets once and for all.

So why is it that the new DoA has such an amazing success among beginners and advanced players alike? For once, you can play for as little as $0.10 on one bet at a time, or as high as $20 if you’re in for bigger stakes. Yet the most sought-after feature of DoA is the Free Spins Bonus. This is simply a legendary feature, and all you need are 3 or more Scatter Symbols anywhere on the screen to get 12 free games and a maximum of 2,500 credits.

There’s also the extremely valuable Wild Symbols, which can go up to 1.500 per one line, and then transform into the famous Sticky Wilds. The Sticky Wilds will remain on your screen until the very end of your Bonus Round, and will also take the place of any other symbols, but the Scatter ones, to make for a better overall roll and win.

You think that’s all? No sir, you also get all of your wins doubled, during the feature itself, but also the possibility of a re-triggering of Free Spins if you get 3 or more Scatter Symbols. If you land on that scheme, you get an additional 5 games and, of course, a ton more chances of landing on the big money. No wonder this game is so popular and has been so ever since its inception. Also, if you’re into Sticky Wilds, then you can try out Stickers, also by the creative people at NetEnt, with amazing free spins in its gameplay.

After having the logistics of DoA sorted, let’s take a look at some statistics for the game. The Hit Frequency for Dead or Alive is set at 30.4%, similar to many other slots like EggOMatic or Jimi Hendrix, for example. The frequency is making DoA into a medium risk slot, with a pretty high variance and a large gap between 4 and 5 identical payouts.

DoA is an extremely good game when it comes to RTP, with 96,8% of its funds being returned to the players. This is the same as with the South Park slot game, for example, which is growing in popularity especially on the mobile platforms. That RTP makes this game one suited for entertainment and long gameplay, and not great for those who want a quick pay. Don’t forget about the video slot jackpot set at 54.000 credits, which yes, it’s on the lower side and almost as low as Starburst. If you’re in the game for some higher returns, then you might consider other slots that pay better in smaller amounts of time.

As with all of the slots that you can read about on our website, please be advised to never play more money than you can spend on them. If you feel like you’re about to lose control over them, stop and seek professional help immediately.