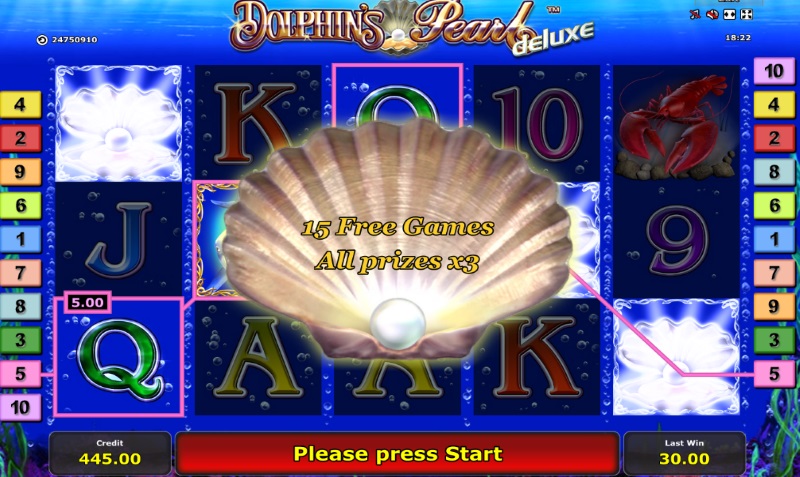 Enter the sublime world of the underwater creatures and ride the winning waves with Dolphins Pearl Deluxe, one of the most famous and loved slots in the world. This game is extremely popular with the online community of slots players. Why? Because it’s still a classic slots game, while having all the elements of a well made, modern game with a great game-play and cool story. The slot is considered to be fascinating and profitable at the same time by all of its players.

You always have a chance when you play Dolphins Pearl Deluxe.

In all honesty, this is one of those games that is mainly dedicated to the newcomers. It has few special symbols, effects or bonus features, so it’s the perfect starting point for all of you who are just starting out in the online casino world. The Deluxe version is an updated form of the original game, and that’s immediately palpable on the graphics and the sounds of the game. The game will transport you to the underwater world where you’ll get to encounter sea creatures and earn pearls, which will be both fun to play, but also give you a higher chance for a win.

Dolphins Pearl Deluxe is one of the most famous games from Novomatic. Its simple game-play is very popular among new players, and it’s also available widely, being one of the favorites in Europe, for example. For the ones that don’t want to make a deposit in order to try their luck, there’s also a free version that they can play, free of charge. Still, being the profitable game that it is, on most online casino platforms, the game’s features, free spins, and overall winnings demand this game to be appreciated and played with real money by the true players.

Dolphins Pearl Deluxe has 5 reels and 10 pay lines. The 5 reels will charm you with marine symbols like the lobster, the stingray, fishes, seahorses, seashells, and dolphins. All you have to do is choose your pay lines, place your bet and hit the Start button. As usual, you can adjust your bet as you go, by pressing on the – or + buttons from under the Bet line.

The bonuses we talked about until now are for both the original and the Deluxe versions of the game. Still, if you play Dolphins Pearl Deluxe, so the second and upgraded version of the slot, you have a better chance of making it big and earn even higher sums at the end of your playtime.

Most players love the game, and for very good reasons. Besides its simple game-play and great wins, you can actually play the game for free at first. After learning the mechanics of the game-play, you can then deposit some real money, but only after you feel confident enough to do so. The game is also available on most of the mobile devices via the apps of the different online casinos out there, so you can play it from anywhere you want to.

The main trick in order to get the slot to pay you back is to not rush the spinning of the reel. The best paying symbols in the game are the seashells and the dolphins. The seashells are the Scatter Symbols. If you land on at least 3 of them on one line, you’ll get 15 free spins and also a triple winning at the end of the bonus round.

If you land on 5 seashells on one line, and you bet on the maximum sum possible, you can get up to 50,000 credit score with one single hand. Now that’s a great win! The Wild Symbol is represented by the dolphin. The dolphin can take the place of any other symbol on the reel but the Scatter Symbol, which is the seashell. If you are lucky enough to land on a row of Wilds, you’ll get a total win of 90.000 credits. That’s a home run!

As always, please be advised to never play more money than you can afford to lose while gambling online. Sometimes, people, good people fall a little too hard for these games, which turn into an addiction to them. Please seek professional help if you feel like you’re one step away from that happening to you.