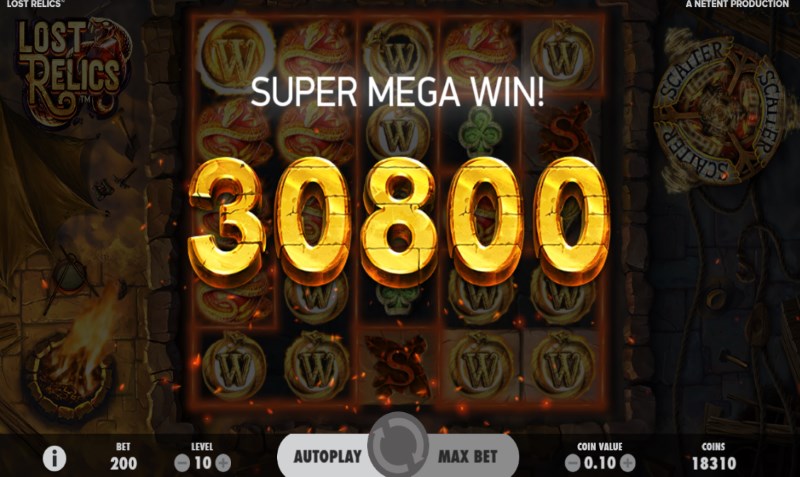 Lost Relics is a masterpiece from NetEnt. This 5 reels and 5 rows video slot features Cluster Pays, making it not your typical game. The game keeps you motivated and interested by constantly making you wonder about the next wins. If you are lucky enough to land on 6 or more symbols that touch, regardless if horizontally or vertically, you will be rewarded. But that’s not all. Under any of these winning combination, a bigger win awaits, and it’s on you to find out which one of them is the best-paying one. Finding the Lost Relics is not easy, but the way the game is laid makes for the perfect scenario for you to keep on digging.

A slot based on adventure and mysteryex

This slot is not the first one that has to do with mystery and adventure, but thanks to some of the new mechanics, it adds a little more than some of its competitors. The game features a Lara Croft-style main character who is envisioned just as the newspaper came into existence, but also symbols like relics, ancient temple and others. While many people say this slot is a spectacle to play and experience, some say NetEnt could’ve done much better in its case.

Find the lost relics and win big. You have to play to find out if you are a winner.

The real Lost Relics slot wins are in the free spins

Landing on 3 Scatter Symbols will award you with 10 Free Spins. As far as gameplay goes, the 3 Scatters apparently show up quite often, at a rate of about 50 regular spins. Even if they do show up more than other video slots released during the same date as Lost Relics, this doesn’t mean you’ll land on big wins every time you get on the Bonus Round. It’s up to you and your luck to make the most out of them, as usual.

The bigger wins will come once you uncover the Treasure Chest that sits right under the reels. This is possible by gathering Cluster wins which in return will sort of upgrade the game. When this happens, your reel will be filled with Free Extra Spins and also Wilds and Sticky Wilds. The better you are at uncovering those Treasure Chests, the more credits you’ll win.

It’s true that this game is not for everybody, but who’s to say it’s not for you? Most people who’ve tried it declared themselves to be avid fans afterwards, having more fun playing it than ever expecting beforehand. The main reason why the gameplay is so attractive is that it hits you on and on with good wins straight from the start. Once you’ve got some credits under your belt, you’re then able to catch the Free Spins rounds and land on some even more serious wins. Yes, you can get up to 100x on a single bet, but that’s no easy task.

Cluster Pays: as mentioned above if you land on 6 symbols that touch each other rather on the horizontal or vertical lines, you’ll trigger one win. You need no pay lines, but just simply a cluster of the same symbols. The more symbols you land on, the bigger your win will be.

A random feature of the base game is that after you win, the tiles where the winning symbols were will break, revealing hidden treasures that can trigger instant credit wins from 2x up to 30x your initial bet, 3 Extra Wilds that can sometimes be hidden on the reels, extra Scatters that will award you with Free Spins and so on.

You can also land on Sticky Wilds, which will stay in their places until the very end of the bonus game. In the “chests” department, there are small, medium or large ones. Of course, the larger the chest you land on, the larger the winnings from inside it. You will get started with smaller chests first, and only can land on a large chest from your third one up.